What’s the most annoying ‘growth hack’ that you see on Twitter? Overuse of hashtags? Directly asking for likes and retweets? Profiles noting that they ‘follow back’?

We recently put the question to the SMT community to glean some more insight into what bothers social media marketers the most in this respect. 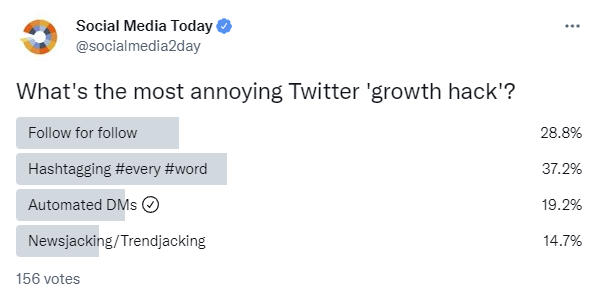 Ah yes, the old hashtag every other word trick.

See, the thing is, hashtags connect users to a broader conversation, so hashtagging random words really doesn’t help. Because nobody’s searching through Twitter and thinking ‘hey, I wonder what people are discussing on the #morning hashtag’.

Not only is nobody searching these vague, broad match hashtags, but they’re very unlikely to want to engage with your unrelated tweets as a result. But then again, people have been misusing hashtags since the beginning of the social media era, so they’re probably not going to change their approach now either.

But for those who are guilty of this, here’s what you should do:

It also depends on your focus – Twitter itself advises that if you’re trying to get people to click on a CTA in a tweet, that adding any hashtags at all can dilute your messaging by giving your audience an alternative to click on. If you want to drive traffic towards a specific action, it may be better to leave out hashtags entirely in order to further highlight that element.

But don’t just hashtag random words. It’s doesn’t work, and as these insights show, people don’t like seeing it.

Follow-for-follow comes in second, and has become a more desperate looking approach over time. Automated DMs have always been a no-no (and I’m yet to see anyone who’s used this approach effectively on Twitter), while trying to latch onto unrelated trends can also look cheap and tacky, unless you can do it well.

Which basically means not trying to latch onto totally off-topic discussions. If you can come up with a great, brand-related take on a trend, like Oreo’s ‘Dunk in the Dark’ tweet at the 2013 Super Bowl, that can work in your favor. But it needs to be tactical, and clever to resonate.

Being clever isn’t always easy – for every Wendy’s Twitter account, winning over audiences with sass and wit, there are many more that are trying and flaming out, or worse, offending people with their ill-planned responses.

Really, being good at Twitter isn’t easy, but hopefully these notes will help you avoid some of the more common missteps and annoyances that users see.

The UK’s leading varicose vein treatment specialist, Veincentre have retained the services of...