Since being sworn in last July as the most unlikely leader in the country’s history, Castillo — a rural elementary school teacher with no previous government experience — has led an ever-changing administration.

He made 20 ministerial changes, an average of nearly one a week. A foreign minister resigned after being exposed as an apologist for the Maoist guerrilla group Shining Path; a home secretary was sacked for hosting a party in breach of coronavirus restrictions; a defense minister resigned in a scandal over the promotion of officers in the armed forces; this week, Castillo’s third prime minister resigned after just four days amid allegations that he physically assaulted his wife and daughter.

The upheaval was not limited to ministries. Resignations and dismissals also took place in the police and the armed forces. In November, prosecutors found $20,000 hidden in a bathroom inside the presidential palace. One of Castillo’s top aides said the money was his rightful savings, but quit anyway.

“In July, we all had the impression that this was going to be a very improvised government, totally inexperienced,” said Oswaldo Molina, executive director of Peru’s Redes think tank. “Unfortunately, it exceeded our worst expectations.”

Castillo was widely criticized for flip-flopping on politics and making statements that he later had to recant or qualify. He recently suggested Peru might cede territory to Bolivia to give the landlocked nation access to the sea. He later said he had no such intention.

“He’s not prepared for the job and he doesn’t have the necessary leadership skills for it,” said Jorge Nieto, a former defense minister and leader of a small centrist political party.

In response, Castillo says he is the victim of a right-wing plot to oust him and that a powerful and conservative Lima-based elite never gave him a chance to govern. In an address to the nation on Friday, he urged lawmakers to consider more than 20 bills his administration has sent to Congress in recent months.

The latest chapter in Peru’s turmoil began last month when the interior minister complained about police corruption and asked the president to help tackle it. The minister said there was no support, so he resigned.

This prompted other departures, including that of Prime Minister Mirtha Vásquez, who in his resignation letter said the “doubts and indecision” that characterized Castillo’s leadership were “unacceptable”.

Castillo then announced the third cabinet reshuffle of his term, changing more than half of the ministers. He named Héctor Velar, a little-known congressman who has swung between political parties and has no ministerial experience, as his new prime minister.

Hours later, Peruvian media reported that five years ago Velar’s wife and daughter reported him to the police for assault and a judge imposed a restraining order on him.

Velar denied the charges but, under intense pressure, resigned on Saturday.

“[Castillo] insists on appointing people who have been accused of crimes and people who have no experience in the positions to which he appoints them,” said Alonso Segura, a former Peruvian economy minister and professor at the Pontifical Catholic University of Lima.

The president has yet to submit his revamped cabinet to Congress for a vote of confidence. Castillo will likely have the backing of Free Perú, the Marxist party that propelled him to power last year and which is the largest party in congress with 32 of 130 seats. The other parties have not yet clarified their positions.

Ultimately, there’s a reasonable chance lawmakers will acquiesce and give Castillo the votes he needs, even if they don’t like his pick of ministers.

Indeed, under Peru’s peculiar political system, Congress has only two “quick fixes” – two opportunities to challenge the president in votes of confidence during a five-year term. If defeated in either case, the president has the right to dissolve congress and rule by decree. Legislators should therefore think carefully before voting against the executive.

“Congress might decide to keep its silver bullets in reserve for now,” Segura said.

The other option available to Castillo’s opponents is to try to impeach him, most likely on the vague grounds of “moral incapacity.” The Peruvian constitution allows it and it has been used against previous presidents.

But it won’t be easy. They need a two-thirds majority in Congress – 87 seats. They tried to oust him in December and failed. Nonetheless, in light of this week’s events, some parties have vowed to try again.

Analysts say the most likely short-term scenario is deadlock: Congress will reluctantly approve Castillo’s new cabinet and the opposition will fail in any attempt to unseat him. He will remain in office and will be increasingly co-opted by various lobbies and interest groups.

“It’s a sad movie,” said Rodolfo Rojas, director of Sequoia, a Lima-based political risk consultancy. “You have a president who has been incompetent, a cabinet that doesn’t function properly, a government that does nothing, and a congress that can’t impeach him.” 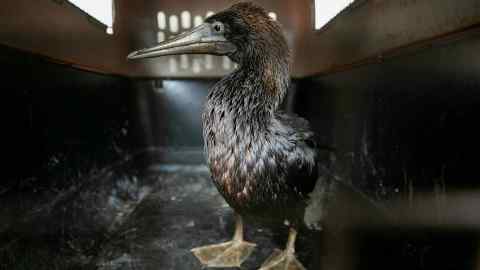 Barring a dramatic event like the resignation of the president, there is no clear way out of the crisis. Even if Castillo is impeached, his vice president would take over. While she may prove a more effective leader, she may struggle to garner support from Congress. Last month, she was expelled from Free Perú for criticizing its hardline Marxist leader.

Analysts say the only silver lining of the past week is the appointment of Oscar Graham as the new finance minister. He is a technocrat with years of ministry and central bank experience.

The currency, the Sol, weakened only slightly this week and has since rallied. Business leaders say they hope Graham’s appointment will ensure Peru’s post-pandemic economic recovery stays on track.

Castillo still had the support of a third of the country in the latest poll conducted by Ipsos in early January, although the head of the polling company in Peru says his rating is “probably worse now”.

The president came to power with a seductive promise of “no more poor in a rich country”. It was a message of hope for millions of poor voters in rural Andean communities, some of whom still see Castillo as a good man trying to do a hard job.

But analysts say the continued upheaval in government has hampered any attempt to deliver the social and economic changes Castillo promised and Peru needs.

“It’s no longer about ideology and left and right, it’s about different interest groups within government, some very small and some corrupt,” said Paula Muñoz, a political scientist at the University of the Pacific in Lima.